This document introduces the main concepts related to styles that affect the user content in the block editor. It points to the relevant reference guides and tutorials for readers to dig deeper into each one of the ideas presented. It’s aimed to block authors and people working in the block editor project.

By creating a post in the block editor the user is creating a number of artifacts: a HTML document plus a number of CSS stylesheets, either embedded in the document or external.

The final HTML document is the result of a few things:

The stylesheets loaded in the front end include:

Since the introduction of the block editor in WordPress 5.0, there were tools for the users to “add styles” to specific blocks. By using these tools, the user would attach new classes or inline styles to the blocks, modifying their visual aspect.

By default, blocks come with a given HTML markup. Think of the paragraph block, for example:

In its simplest form, any style rule that targets the p selector will apply styles to this block, whether it comes from a block, a theme, etc.

The user may change the state of this block by applying different styles: a text alignment, a color, a font size, a line height, etc. These states are reflected in the HTML markup of the block in the form of HTML attributes, mainly through the class or style attributes, though it can be any other the block author sees fit.

After some user modifications to the block, the initial markup may become something like this:

This is what we refer to as “user-provided block styles”, also know as “local styles” or “serialized styles”. Essentially, each tool (font size, color, etc) ends up adding some classes and/or inline styles to the block markup. The CSS styling for these classes is part of the block, global, or theme stylesheets.

The ability to modify a block state coupled with the fact that a block can live within any other block (think of a paragraph within a group), creates a vast amount of potential states and style possibilities.

If you follow the block tutorial you can learn up about the different parts of the block API presented here in more detail and also build your own block. This is an introduction to the general concepts of how a block can let users edit its state.

To build an experience like the one described above a block author needs a few pieces:

In essence, these are the essential mechanics a block author needs to care about for their block to be able to be styled by the user. While this can be done completely manually, there’s an API that automates this process for common style needs: block supports.

Block Supports is an API that allows a block to declare what features it supports. By adding some info to their block.json file, the block tells the system what kind of actions a user can do to it.

The paragraph declares support for font size in its block.json. This means the block will show a UI control for users to tweak its font size, unless it’s disabled by the theme (learn more about how themes can disable UI controls in the theme.json reference). The system will also take care of setting up the UI control data (the font size of the block if it has one already assigned, the list of available font sizes to show), and will serialize the block data into HTML markup upon user changes (attach classes and inline styles appropriately).

By using the block supports mechanism via block.json, the block author is able to create the same experience as before just by writing a couple of lines. Check the tutorials for adding block supports to static and dynamic blocks.

Besides the benefit of having to do less work to achieve the same results, there’s a few other advantages:

While the Block Supports API provides value, it also comes with some limitations a block author needs to be aware of. To better visualize what they are, let’s run with the following example of a table block:

One of the limitations is that, from all the styles available, there can be only one instance of any them in use by the block. Following the example, the table block can only have a single font size. If the block author wanted to have three different font sizes (head, body, and footer) it can’t do it using the current block supports API. See this issue for more detailed info and ways forward.

This is an active area of work you can follow in the tracking issue. The linked proposal is exploring a different way to serialize the user changes: instead of each block support serializing its own data (for example, classes such as has-small-font-size, has-green-color) the idea is the block would get a single class instead (for example, wp-style-UUID) and the CSS styling for that class will be generated in the server by WordPress.

While work continues in that proposal, there’s an escape hatch, an experimental option block authors can use. Any block support can skip the serialization to HTML markup by using __experimentalSkipSerialization. For example:

This means that the typography block support will do all of the things (create a UI control, bind the block attribute to the control, etc) except serializing the user values into the HTML markup. The classes and inline styles will not be automatically applied to the wrapper and it is the block author’s responsibility to implement this in the edit, save, and render_callback functions. See this issue for examples of how it was done for some blocks provided by WordPress.

Note that, if __experimentalSkipSerialization is enabled for a group (typography, color, spacing) it affects all block supports within this group. In the example above all the properties within the typography group will be affected (e.g. fontSize, lineHeight, fontFamily .etc).

To enable for a single property only, you may use an array to declare which properties are to be skipped. In the example below, only fontSize will skip serialization, leaving other items within the typography group (e.g. lineHeight, fontFamily .etc) unaffected.

Support for this feature was added in this PR.

Global Styles refers to a mechanism that generates site-wide styles. Unlike the block styles described in the previous section, these are not serialized into the post content and are not attached to the block HTML. Instead, the output of this system is a new stylesheet with id global-styles-inline-css.

This mechanism was introduced in WordPress 5.8. At the time, it only took data from WordPress and the active theme. WordPress 5.9 expanded the system to also take style data from users.

This is the general data flow: 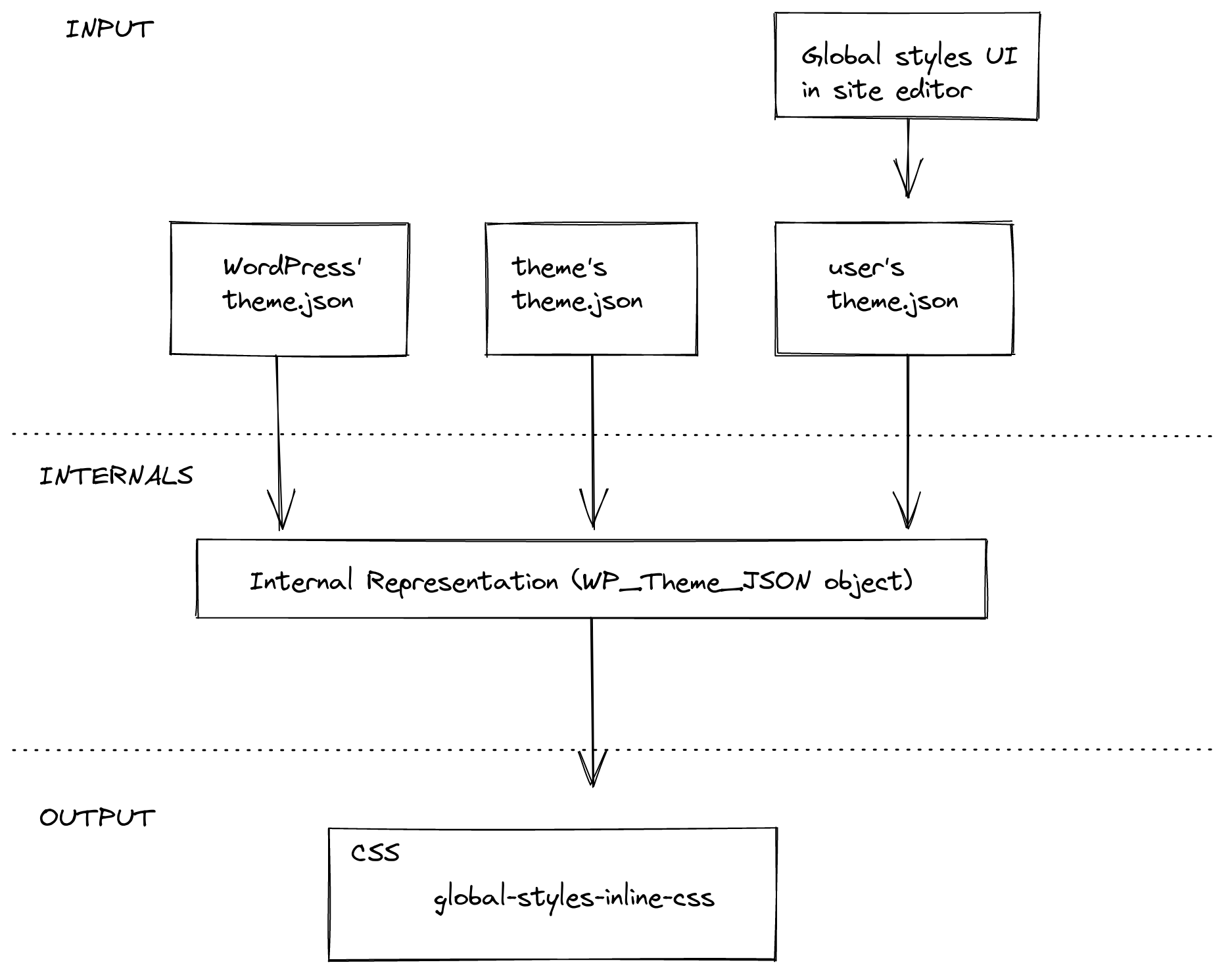 The process of generating the stylesheet has, in essence, three steps:

The data can come from three different origins: WordPress defaults, the active theme, or the user. All three of them use the same theme.json format.

Data from WordPress and the active theme is retrieved from the corresponding theme.json file. Data from the user is pulled from the database, where it’s stored after the user saves the changes they did via the global styles sidebar in the site editor.

The goal of this phase is to build a consolidated structure.

There are two important processes going on in this phase. First, the system needs to normalize all the incoming data, as different origins may be using different versions of the theme.json format. For example, a theme may be using v1 while the WordPress base is using the latest version. Second, the system needs to decide how to merge the input into a single structure. This will be the focus of the following sections.

For example, if we had the following three theme.json structures coming from WordPress, the theme, and the user respectively:

The result after the consolidation would be:

The settings section works differently than styles. Most of the settings are only used to configure the editor and have no effect on the global styles. Only a few of them are part of the resulting stylesheet: the presets.

Presets are the predefined styles that are shown to the user in different parts of the UI: the color palette or the font sizes, for example. They comprise the following settings: color.duotone, color.gradients, color.palette, typography.fontFamilies, typography.fontSizes. Unlike styles, presets from an origin don’t override values from other origins. Instead, all of them are stored in the consolidated structure.

For example, if we have the following theme.json structures coming from WordPress, the theme, and the user respectively:

The result after the consolidation would be:

The last phase of generating the stylesheet is converting the consolidated data into CSS style rules.

The styles section can be thought of as a structured representation of CSS rules, each chunk representing a CSS rule:

For example, the following theme.json structure:

is converted to the following CSS:

From the settings section, all the values of any given presets will be converted to a CSS Custom Property that follows this naming structure: --wp--preset--<category>-<slug>. The selectors follow the same rules described in the styles section above.

For example, the following theme.json

Will be converted to the following CSS style rule:

In addition to the CSS Custom Properties, all presets but duotone generate CSS classes for each value. The example above will generate the following CSS classes as well:

By default, the selector assigned to a block is .wp-block-<block-name>. However, blocks can change this should they need. They can provide a CSS selector via the __experimentalSelector property in its block.json.

If blocks do this, they need to be registered in the server using the block.json, otherwise, the global styles code doesn’t have access to that information and will use the default CSS selector for the block.

Every chunk of styles can only use a single selector.

This is particularly relevant if the block is using __experimentalSkipSerialization to serialize the different style properties to different nodes other than the wrapper. See “Current limitations of blocks supports” for more.

Similarly to block supports, there can be only one instance of any style in use by the block. For example, the block can only have a single font size. See related “Current limitations of block supports”.