Are you interested in contributing to the native mobile editor? This guide is a detailed walk through designed to get you up and running!

Note that these instructions are primarily focused on the macOS environment. For other environments, the React Native quickstart documentation has helpful pointers and steps for getting set up.

If you’re working in multiple JS projects, a node version manager may make sense. A manager will let you switch between different node and npm versions of your choosing.

After installing nvm, run the following from the top-level directory of the cloned project:

If you have an existing Gutenberg checkout be sure to fully clean node_modules and re-install dependencies.
This may help avoid errors in the future.

CocoaPods is required to fetch React and third-party dependencies. The steps to install it vary depending on how Ruby is managed on your machine.

If you’re using the default Ruby available with MacOS, you’ll need to use the sudo command to install gems like Cocoapods:

Note, Mac M1 is not directly compatible with Cocoapods. If you encounter issues, try running these commands to install the ffi package, which will enable pods to be installed with the proper architecture:

It may not be necessary to manually install Cocoapods or the ffi package if you’re using a Ruby Version manager. Please refer to your chosen manager’s documentation for guidance.

rbenv is the recommended manager if you’re running Gutenberg from within the WordPress iOS app (vs. only the demo app).

Install Xcode via the app store and then open it up: 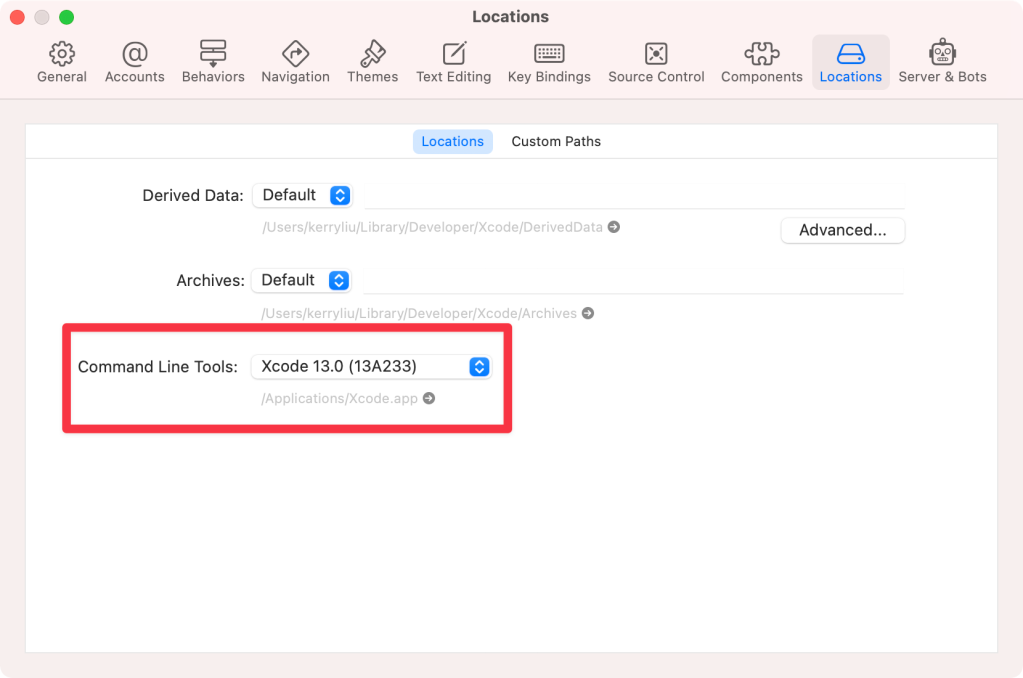 react-native doctor can be used to identify anything that’s missing from your development environment. From your Gutenberg checkout, or relative to /packages/react-native-editor folder, run: 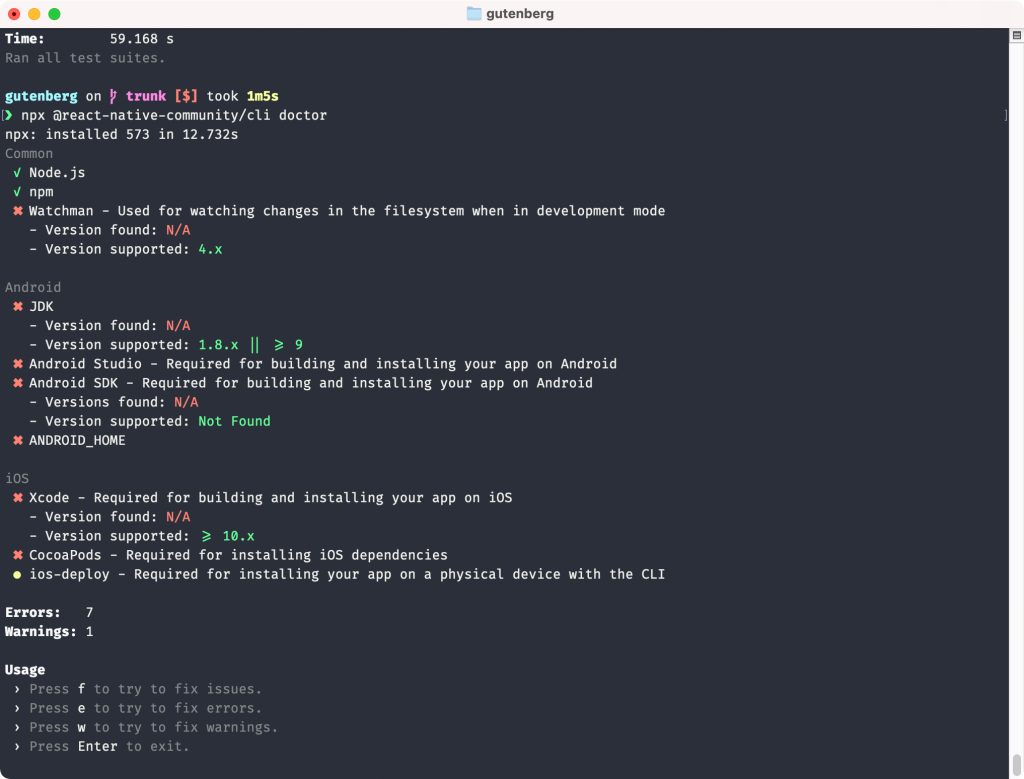 See if doctor can fix both “common” and “iOS” issues. (Don’t worry if “Android” still has ❌s at this stage, we’ll get to those later!)

Once all common and iOS issues are resolved, try:

In another terminal type:

After waiting for everything to build, the demo app should be running from the iOS simulator: 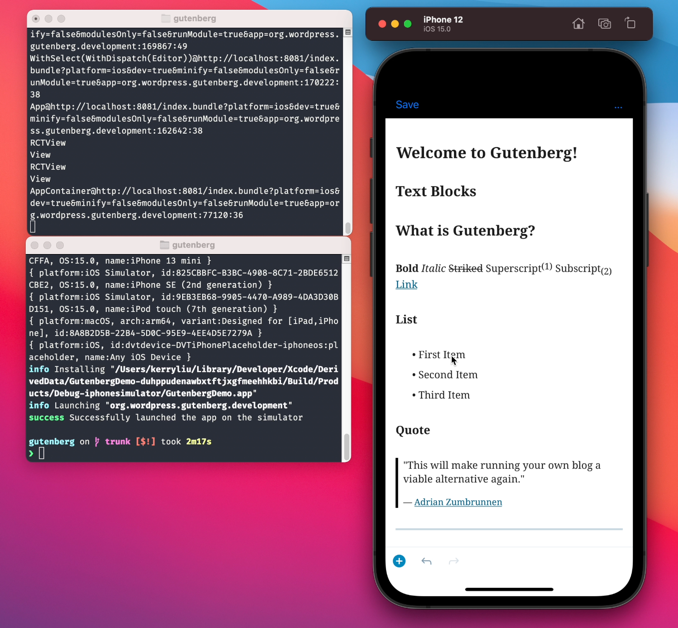 The JDK recommended in the React Native documentation is called Azul Zulu. It can be installed using Homebrew. To install it, run the following commands in a terminal after installing Homebrew:

If you already have a JDK installed on your system, it should be JDK 11 or newer.

Next, open an existing project and select the Gutenberg folder you cloned. 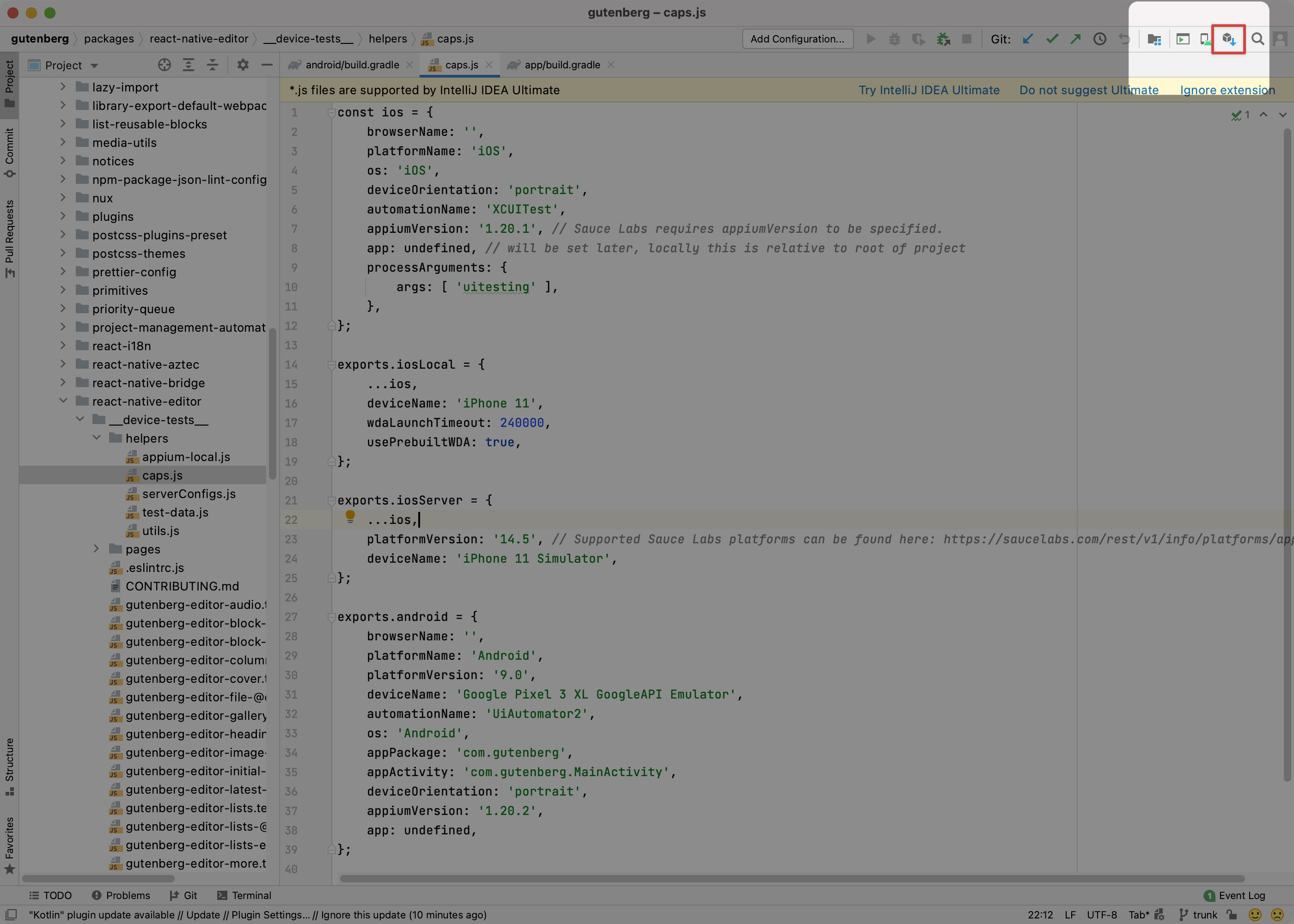 We can download SDK platforms, packages and other tools on this screen. Specific versions are hidden behind the “Show package details” checkbox, check it, since our build requires specific versions for E2E and development: 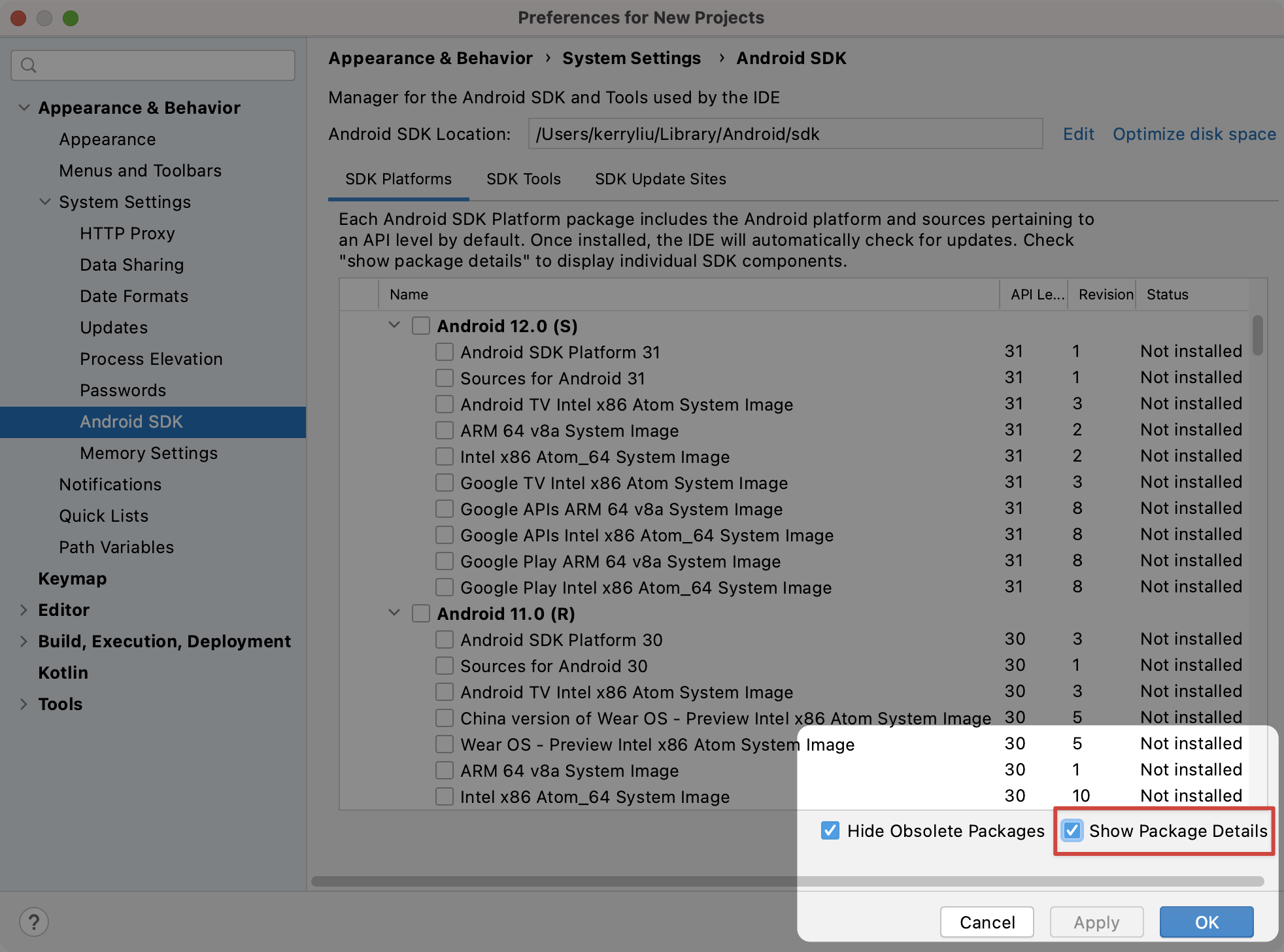 If you don’t want to dig through files, stack traces will complain of missing packages, but it does take quite a number of tries if you go through this route. 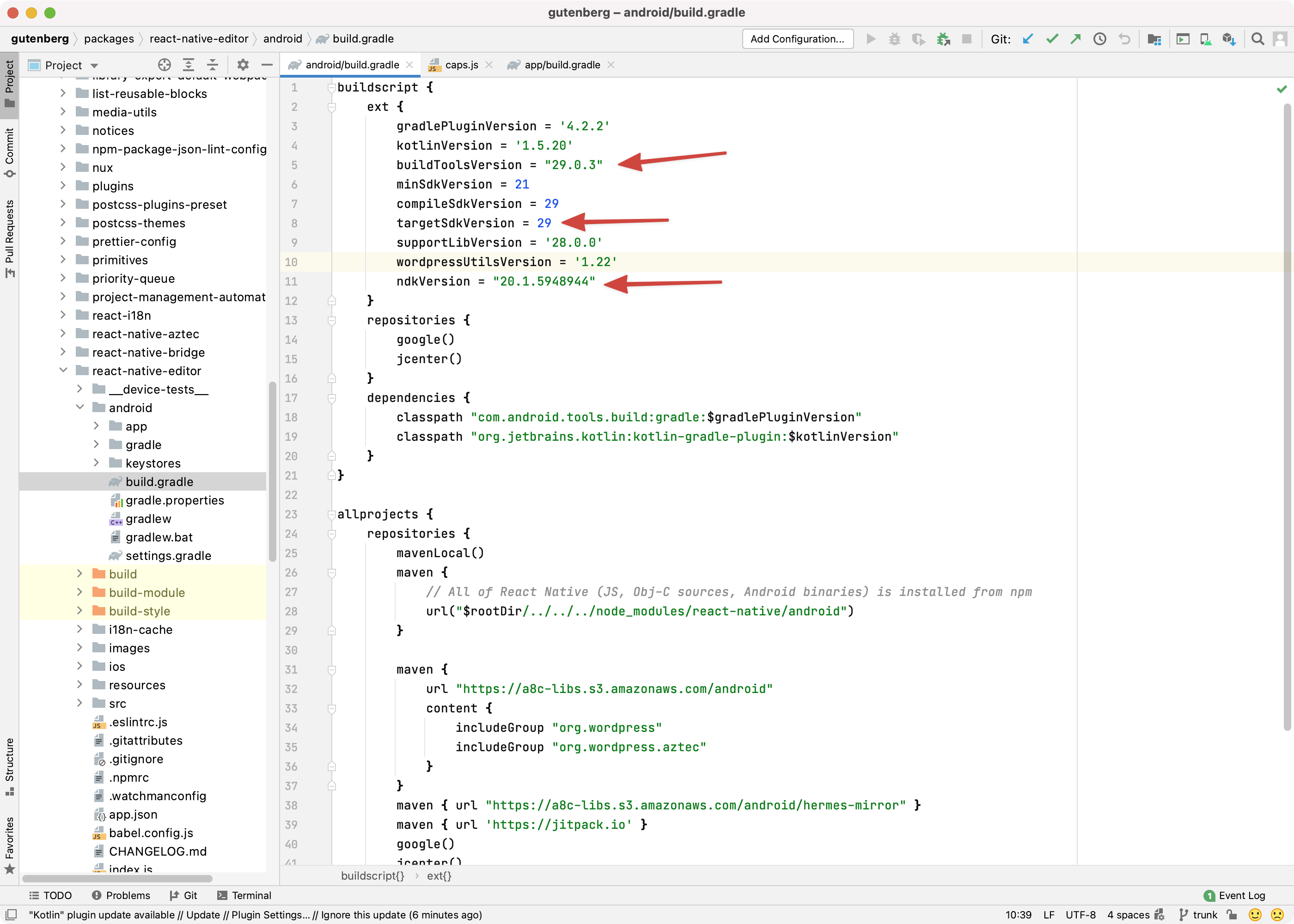 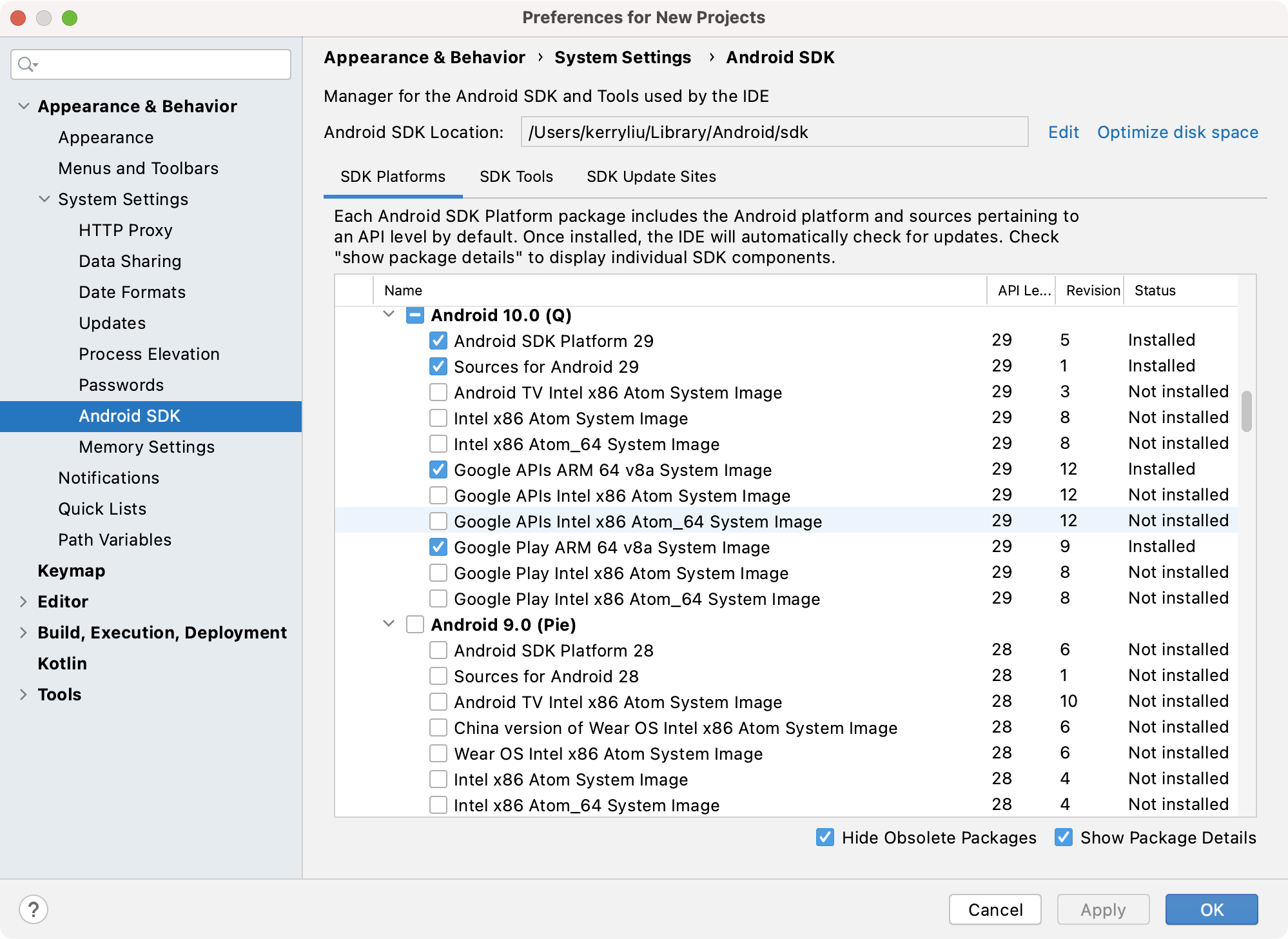 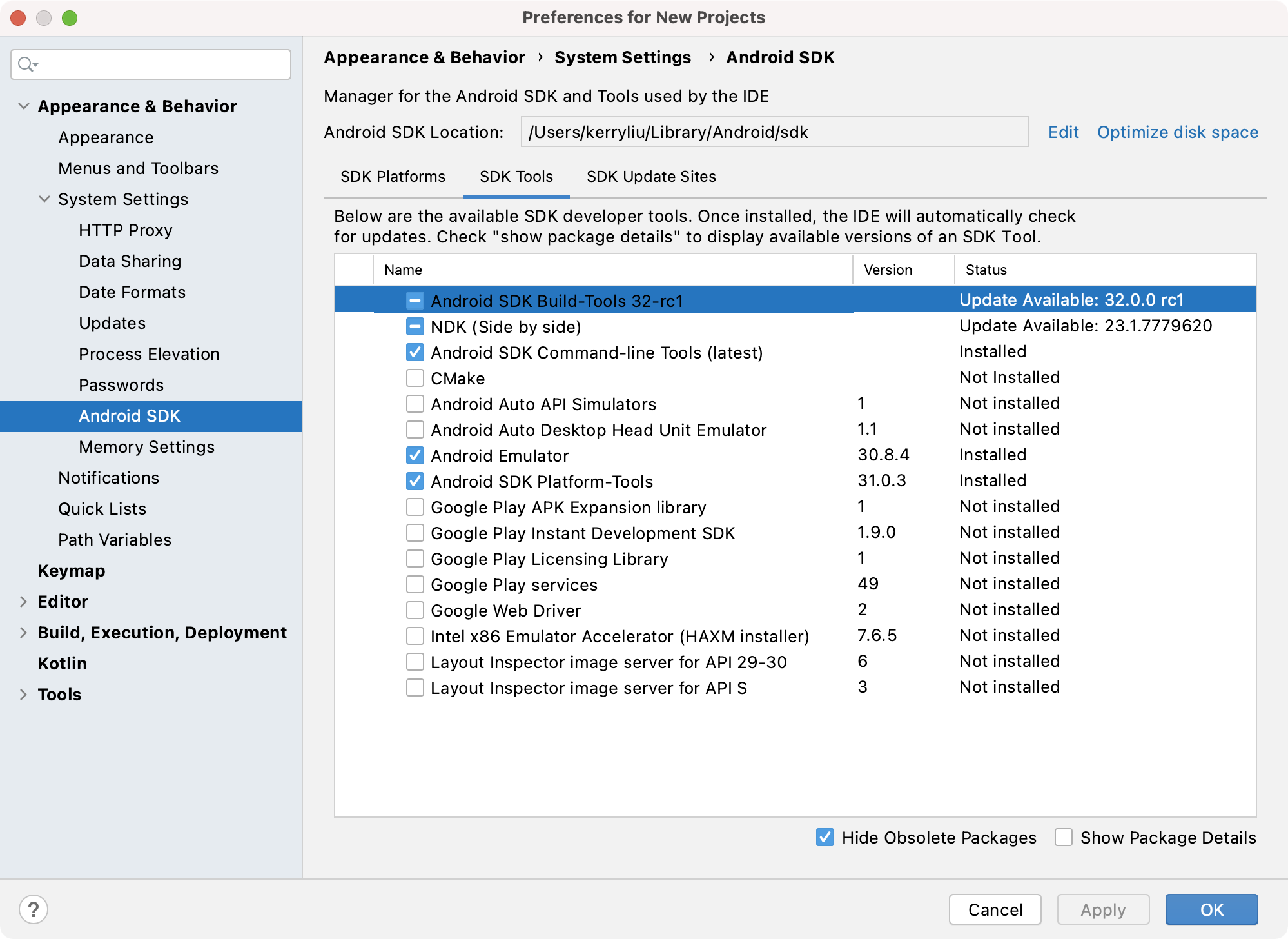 Export the following env variables and update $PATH. We can normally add this to our ~/.zshrc file if we’re using zsh
in our terminal, or ~/.bash_profile if the terminal is still using bash.

Save then source, or open a new terminal to pick up changes.

If the SDK path can’t be found, you can verify its location by visiting Android Studio > Preferences > System Settings > Android SDK 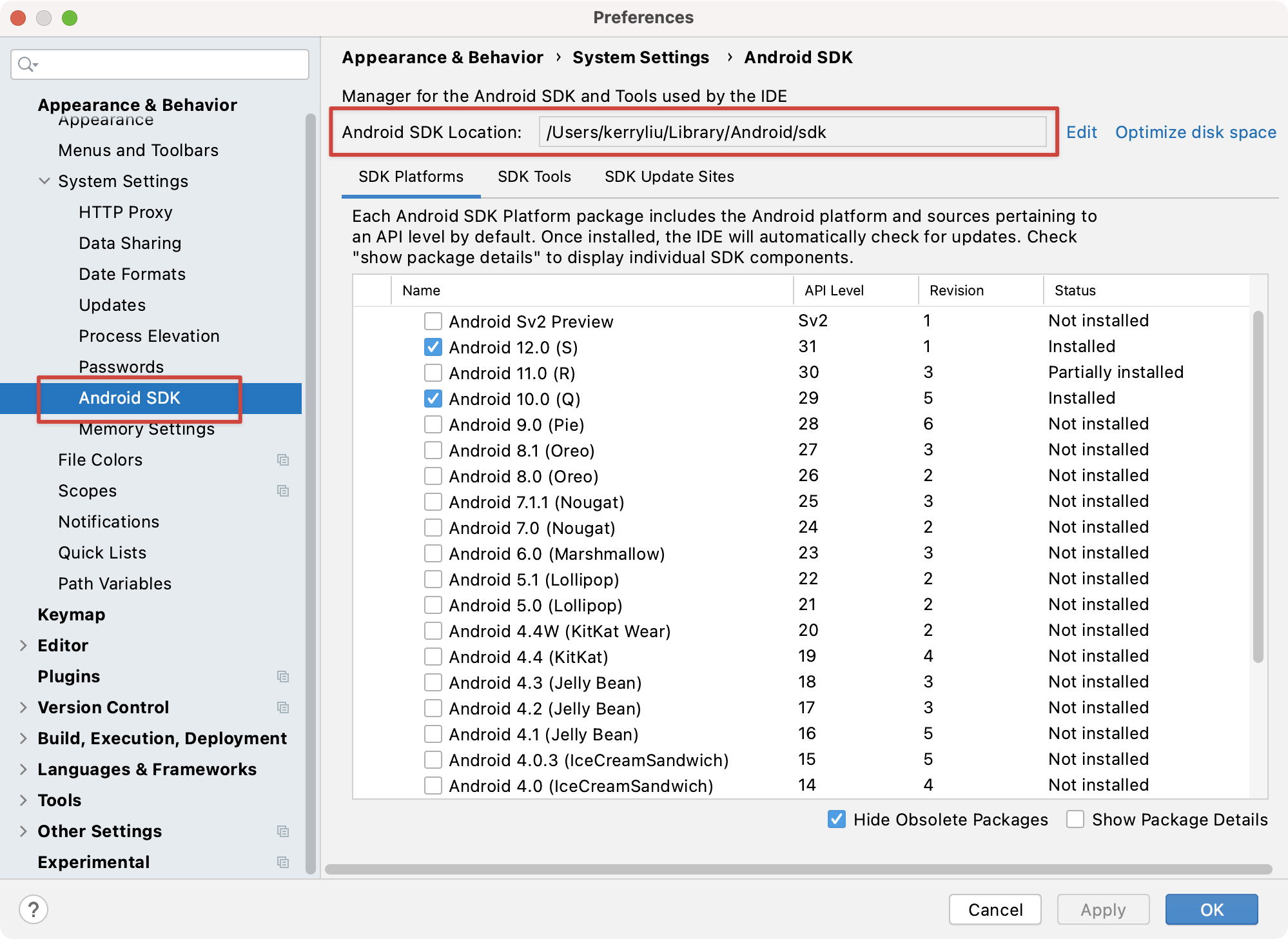 Next, let’s create a virtual device image. Click on the phone icon with an android to the bottom-right.

This brings up the “Android Virtual Device Manager” or (AVD). Click on “Create Virtual Device”. Pick a phone type of your choice: 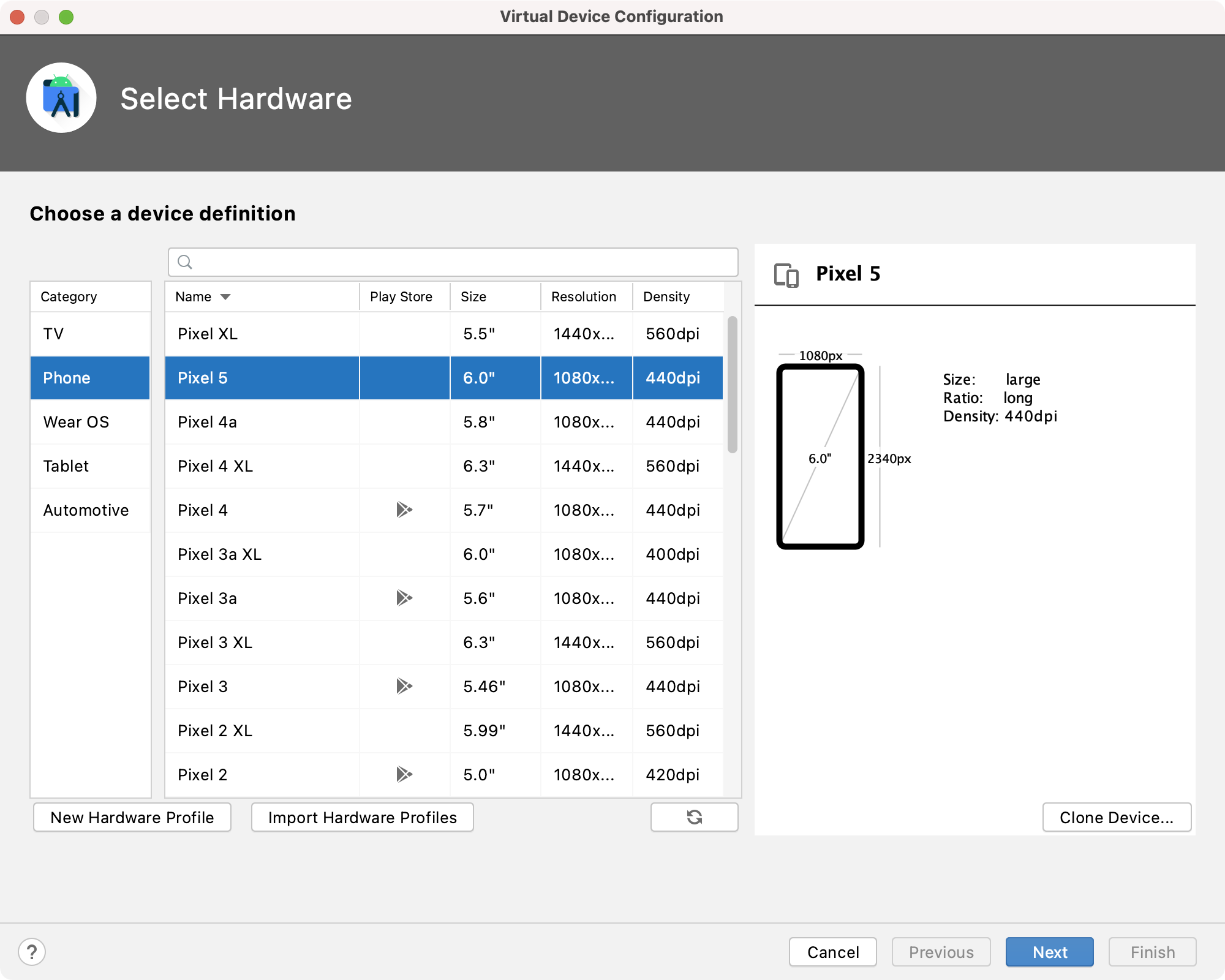 Pick the target SDK version. This is the targetSdkVersion set in the build.gradle file. 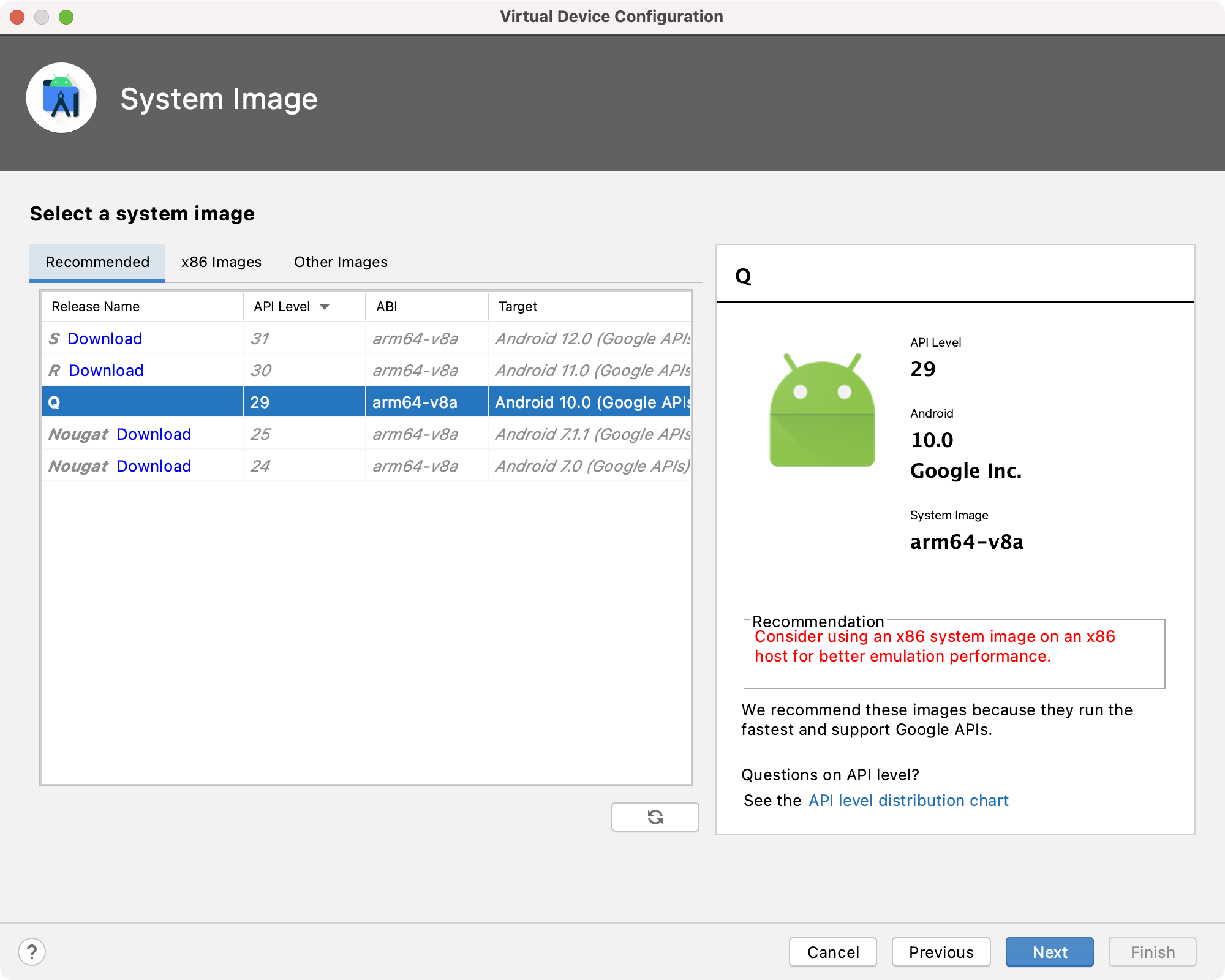 There are some advanced settings we can toggle, but these are optional. Click finish.

In another terminal run the following to launch the demo app in the Android emulator (if the emulator isn’t already running, it’ll also be launched as part of this command):

After a bit of a wait, we’ll see something like this: 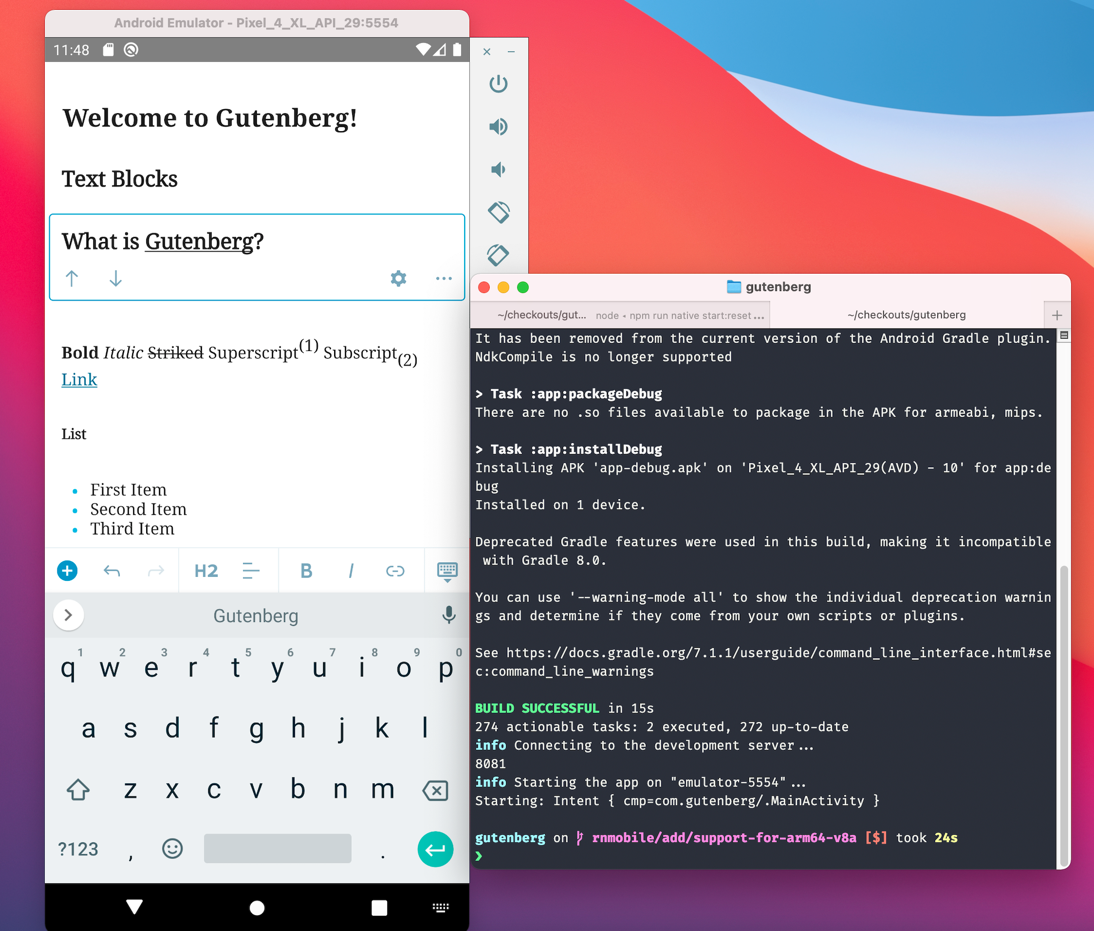 Appium has it own doctor tool. Run this with: 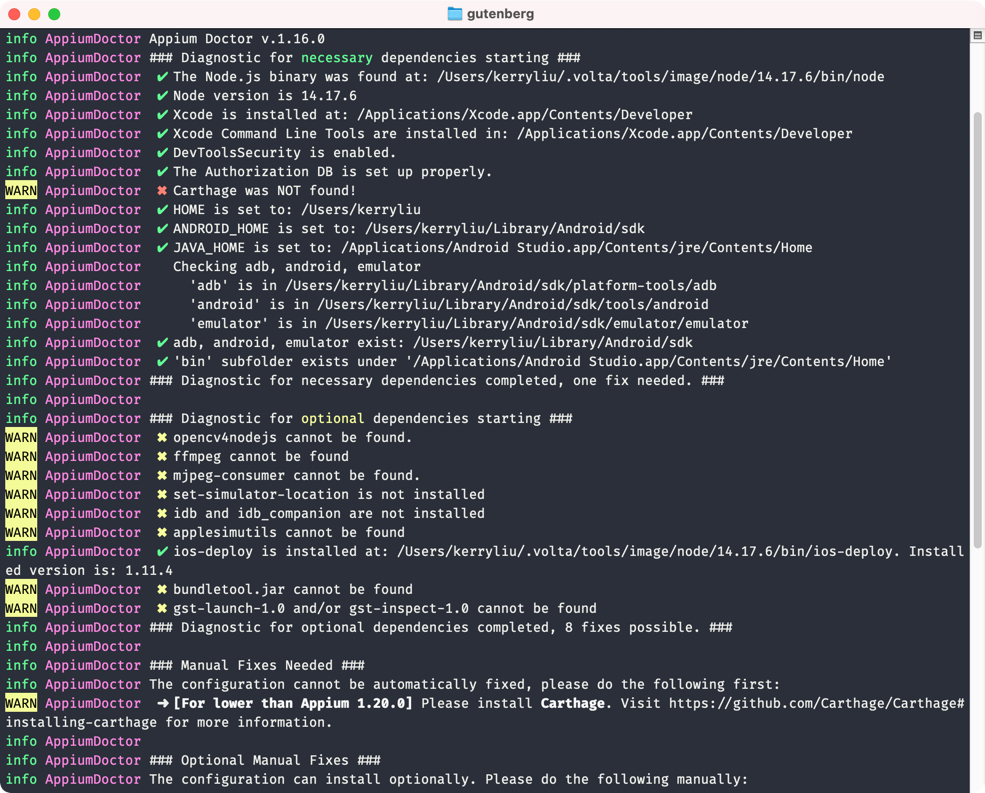 If we know we can run the iOS local environment without issue, E2Es for iOS are straightforward. Stop any running metro processes. This was launched previously with npm run native start:reset.

Then in terminal type:

Passing a filename should also work to run a subset of tests:

If all things go well, it should look like:

Create a new virtual device() that matches the device specified in packages/react-native-editor/device-tests/helpers/caps.js At the time of this writing, this would be a Pixel 3 XL image, using Android 9 (API 28).

Start the virtual device first. Go back to the AVD by clicking on the phone icon, then click the green play button. 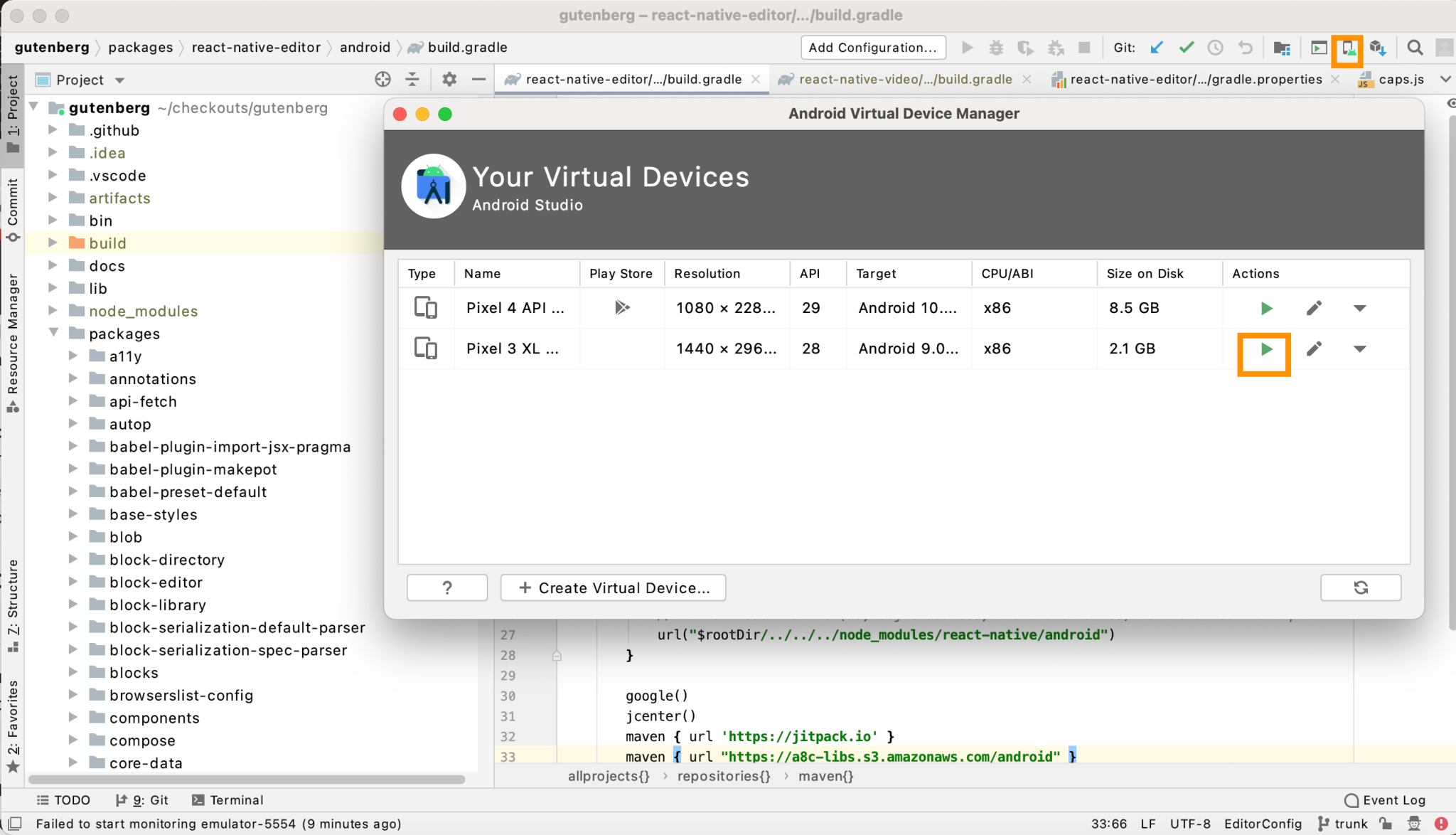 Make sure no metro processes are running. This was launched previously with npm run native start:reset.

Then in a terminal run:

Passing a filename should also work to run a subset of tests:

After a bit of a wait we should see: 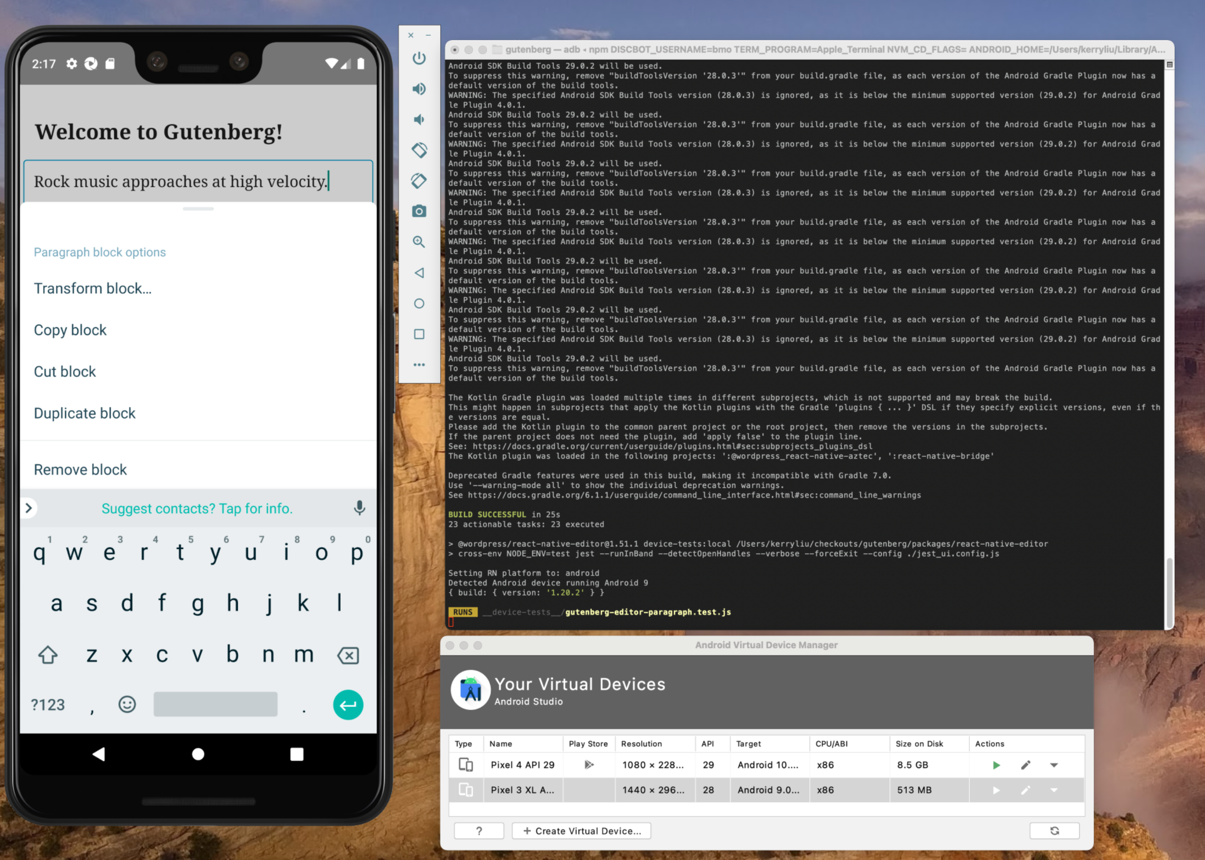